Are your IT skills really up to date?

If you’re in the IT world you don’t need telling how often the landscape changes.  You may have the developer skills to feel like you’re the master or mistress of your domain at the moment but by next year the scene may have changed again.  Tech is changing faster than ever at the moment with the rapidly increasing take up of Artificial Intelligence, the Cloud, DevOps processes and the changes to everyone’s lives that the iOT is bringing.

Unfortunately these rapid changes means that you can’t rest on your laurels these days unless you’ve got a scarce skill that is in demand from old legacy system companies – admittedly there are countless, but do you really want to work with the needless complexity that they bring and the knackered old kit that they’ve got? You do? Then fair enough – it’s your call.If you want to work with the latest technology however on truly exciting projects that move the world forward then you have to keep your skills up to date.

So where’s the market going and what do you need?  Read on to find out more about the latest trends and hottest languages right now and start preparing for your future.Nb. We’ve used a variety of data sources for this article including the Tiobe Index, StackOverflow, Github and ITJobswatch as they all collect their data differently and to ensure we cover all bases.

All change at the top

The latest chart of programming languages from the Tiobe Index (August 2017) shows that the top 10 most popular languages are actually all in decline aside from VB.net with a tiny increase.  Times are changing!

The new languages that are moving fast

It has jumped from position 60 to 32 in the last month so we’ll be  keeping a close eye on Crystal.  It’s an Open Source OO language inspired by Ruby’s syntax and licenced by Apache. It should be easy for Ruby Developers to learn and it is ‘blazingly fast’ with a low memory footprint

Kotlin is a concise Open Source statically typed language that targets the JVM, Android, JavaScript and Native.  It can be used for any type of development including server-side, client-side, web and Android.  Kotlin/Native has just been released and now can support embedded systems, macOS and iOS.  The possibilities are huge.

Clojure is an Open Source general purpose language that is robust, practical, fast and suitable for the same areas as Java.  It has modernised Lisp and avoids some of the issues that Java developers have with customer approved infrastructure, performance, access to their code base and libraries and concurrency using native threads and locking.

Hack is an Open Source language for the HipHop Virtual Machine (HHVM) created by Facebook and backwards compatible with PHP. It reconciles the fast development cycle of a dynamically typed language with the discipline provided by static typing whilst adding features found in other modern languages.  It provides instantaneous type checking and typically runs in less than 200 milliseconds so is easy to integrate into workflows.

Julia is an Open Source high level dynamic programming language designed for numerical analysis and computational science whilst also being useful for general programming, web use or as a specific language.  It has been used for risk calculations for Aviva and the Federal Bank of New York has used it to make models of the US economy where it proved 10 x faster than Matlab

Whilst we’re talking about new languages let’s not forget the enormous leap that Go has had as a language over the last few years (up 4 places recently) and it still remains the biggest climber in Tiobe’s top 20 languages and has been the ‘language of the year’. It is fast to compile, easy to learn with simple syntax, has a feature rich standard library and is becoming vital in the move towards multi-core and concurrent processing especially in industrial settings.

Dart has risen 6 places and is an application programming language owned by Google (used by them to make very large apps) and is easy to learn, scale and is deployable everywhere.  Google aim to ensure that Dart is ‘productive and stable’ with a solid foundation of libraries and tools and is a nice and easy experience for developers

Stack has some great data on the changes in demand from companies for different technologies this year and has large increases for ReactJS, Docker, Ansible, Apache Spark and System Admin. 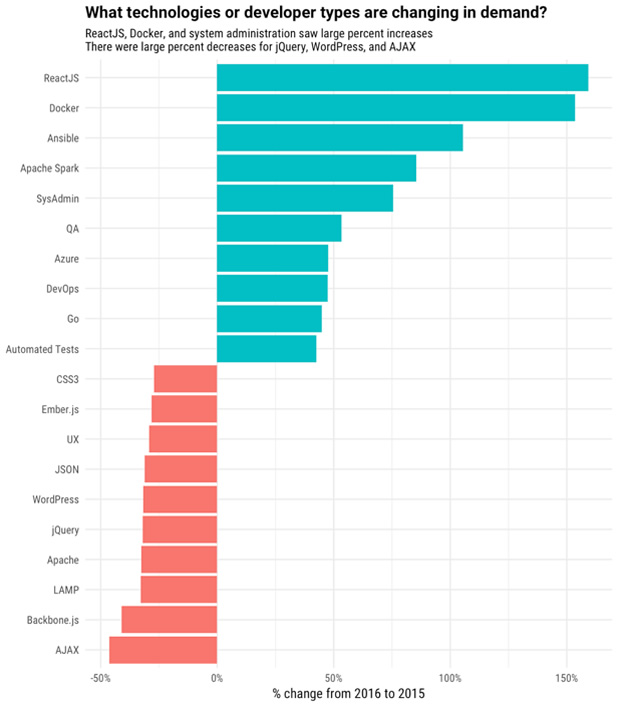 ReactJS is an Open Source JavaScript library for building user interfaces.  Its sudden surge in popularity may be partially due to Angular 2 not being built with backwards compatibility and many developers jumping ship to ReactJS.

Docker is now the most popular DevOps tool, taking the lead over Chef and Puppet (but keep an eye out for Kubernetes growing rapidly too). The average container usage  has quintupled for companies within 9 months (according to Datadog) so there’s no wonder demand for Developers is increasing so rapidly

Ansible has become a go to solution for IT operations, DevOps and Cloud due to its ease of set up and the fact that it is also easy to pick up whatever the team, removing some of the more tedious jobs through simple automation.

Apache Spark is a ‘lightning fast’ general engine for large scale data processing used by Big Data Architects, Data Developers and Engineering Directors.  It is easy to use, powers a stack of libraries, runs on pretty much everything and is super-fast.

This role has changed in many companies with the advent of the Cloud, DevOps and increased demands for security.  It has evolved into a new super breed that can implement and maintain the next generation of architecture.  This has created a situation where demand often out strips the current capabilities of System Administrators on the market.

In a world that increasingly revolves around customer satisfaction the need for Quality Assurance is greater than ever and hence the demand for jobs such as Lead Test Engineer, Manual QA Tester and Senior QA Automation Engineer has increased substantially.

Where is the highest demand?

We’ve seen the highest changes in demand but what about where there is a mismatch between demand and the number of developers?  There is huge demand for Cloud (Back End), iOS, Android, DBA (My SQL and SQL Server), Desktop Windows, Front and Back End Web, PHP and Java so if you’re working in those areas – don’t move!  And if you’re in one of the areas where there are too many developers like WordPress you might want to consider adapting your skillset. 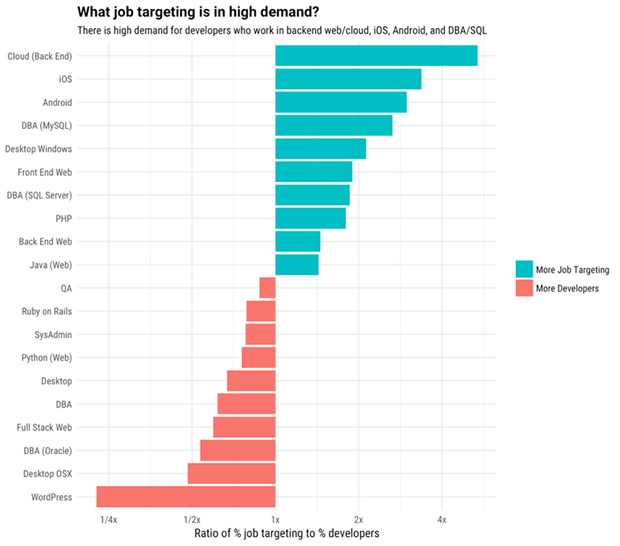 What about UK centric demand?

StackOverFlow and Tiobe are now global leaders in Tech and Developer information and can certainly be taken as an indication of what is likely to happen in the UK, but every country is a little different.  We’ve got Brexit looming which will certainly have an impact on supply and demand and nobody really knows yet how that will play out.

What we do know is that the last three months of job demand (from May to August) in the UK looks like the chart below.  We have listed the top skills and job roles for Permanent and Contract (thanks to ITJobsWatch) and have looked at what type of demand is highest.  You’ll notice that the top half of both the Contract and Permanent tables are yellow which we picked for roles coming under the ‘Containers’ category and there is also a wide range of Finance roles (green). 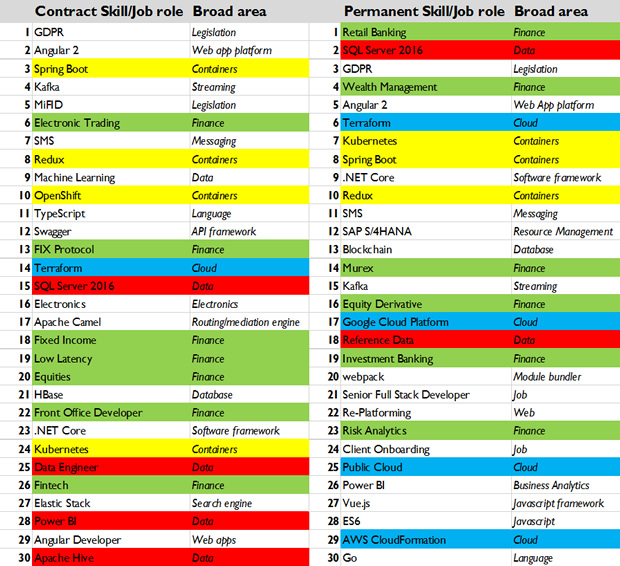 Why are Containers so popular right now?

If you haven’t heard of containers this year where have you been?  It’s one of the hottest topics in IT especially in the Cloud and DevOps worlds and keeps growing.  Containers are (for those who have been busy doing other stuff) standardised units of software that can be packaged up for development, shipment and deployment.  Everything needed to run the software is included from code, runtime, system tools and libraries to settings and runs the same on any environment, be it Linux or Windows. Containers also isolate software from its surroundings e.g. from out of sync staging environments and reduce conflicts.

Docker is the leader in the Container market right now so it is surprising that it doesn’t come higher in the stats although ITJobsWatch aren’t so focused on programming languages or typical IT as can be seen by the fact that GDPR legislation is topping the list so the data may be slightly skewed.

So, are your skills up to date?

If you’re starting to have doubts then it could be time to upskill.  Check out our blog on where to find the best courses and check out the Events section on our website to learn about the latest conferences, workshops, forums, meetups, seminars and bootcamps in the UK where you can learn more from industry leaders and your peers about what is happening now and in the future.

Project Manager - CONTRACT - £250 - £300 per day - French Speaking - Technology Explore Group have been fortunate enough to partner with a leading digital solutions provider. To date, they have enabled a number of their clients, which cover industries such as insurance, gaming, FS,...